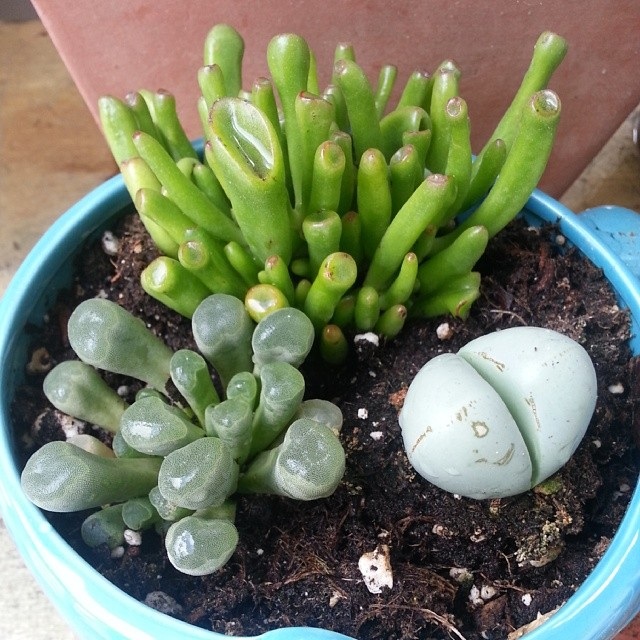 Some of my new succulent babies. I love the weird ones the most.
Reading:

-The Ring and the Crown by Melissa de la Cruz. I read the first book in her Blue Bloods series a million years ago and I always meant to read the rest of the series but by the time the second book came out it was wildly popular and there were over a hundred reservations on it at the library. That’s honestly how so many book series ended for me. Read the first one, it got super popular, everyone reserves it, I refuse to wait and then I never read it again. That’s what (thankfully) happened to Twilight for me as well. I’m sure there are plenty of wonderful books that i’ve missed out on because my local library only had 2 copies. Selfish. ANYWAY. This book was exactly what I needed. That is to say I read it in a day, it was light and fun and entertaining. The puzzles and plot twists weren’t very hard to figure out but I enjoyed the characters. Only downfall was that the last few pages of the book were spent going “AND HERE ARE ALL THE ANSWERS!” It read like the end of an episode of Scooby Doo where they wrap up the mystery and all the loose ends and it’s all so neat and tidy! I honestly thought this was going to be the first in a series so I am a bit disappointed in that hasty but tidy end.
– I’m hoping to start the Daughter of Smoke and Bone this week too but it’s Hate Week (i’ll write about that later) and i’m not sure how much time i’ll have. The weekend is also jam packed with our trip to Laredo for the baby shower (!!!!) but hopefully i’ll trick Mando into driving so I can read.

Listening:
-I love Ingrid Michaelson’s new album Light’s Out SO MUCH. I actually went a bought an actual real live CD instead of just ripping it off via spotify all the time. I also chose to go the CD route rather than just straight up digital for a very lazy reason and that reason is that my audio chord that links my ipod to my car is currently ten kinds of messed up.
-I’ve also been seriously enjoying Future Island’s newest album ‘Singles’. It’s absolutely flawless from top to bottom and makes my vaguely goth but groovy heart very happy. If you haven’t seen their performance on Letterman do yourself a favor and watch it. It’s so sincere and I love it.

Watching:
-Can I freely admit that i’ve been watching Attack on Titan? I’ve seen it so much on tumblr and all i’ve gotten from those posts is just “I don’t need this in my life” and i’ve been fine with that but then Netflix was like HEY LOOK A SHOW and since Netflix said so I thought I would give it a try. Now i’m just really confused about my life choices and also really intrigued. Started from the bottom…and still here.
-We also just watched Equilibrium and wow. That definitely has all kinds of tie ins for both Brave New World AND 1984 so i’m pretty excited about all of those tie ins. The kids have been asking me for weeks if i’ve seen it so they can use it to relate to the material during discussion and man I can’t believe it took me this long to get around to it. I need to step up my dystopia movie game.

In Other News:
-It’s Hate Week! The week my kids dread alllll year because they don’t know what they’re worried about but they’re sure there has to be something they can complain about! The kids are in the middle of reading 1984 right now so for the next week we’re doing a social experiment with them. They have to follow a bunch of rules taken from the society of Oceania in 1984 and there are secret thought police spread throughout their ranks! They get super paranoid and end up writing really good experience essays at the end of it.  I’ll write a wrap up at the end of the week and give more details then.
-I’ve been working out with the other teachers after school twice a week (except last week oops!) because a coworker is leading a boot camp. I’ve been a big old lump lately so this has been helping with that. I’m also hoping that i’ll be able to wake up from now and start walking in the mornings, just something to get my days started better. I’ll let y’all know if that even ends up working out.

That’s all for now, i’m just patiently waiting for the next 30 minutes to pass so I can watch the new episode of Game of Thrones, in the meantime i’m meal prepping for the week. Back on track.


Until next time,
Meagan