I’ve been having a ridiculously busy and stressful week and it’s only Wednesday. These are the days where i’m thanking past Meagan for buying all of the organizers and planners I own, and also cursing past Meagan for not using them effectively enough. Last year I bought an Erin Condren life planner and got the 18-month version and it’s been super useful, when I actually use it like it’s supposed to be used. Sometimes I get a little behind like I have been lately and I need to play planner catch up. It’s really only then that I realize how hellishly busy i’ve been and how far behind i’ve gotten. For example: I meal prepped last week and then neglected to eat the meals I prepped. I still have 2 of mine from last week in the fridge and i’m wondering if I have time to turn them into a green chile stew before they’re just over and gone. I always use the dirty dishes analogy with my students and then fail to apply it to my own life! (Analogy: If you wash your dishes as you go then it’s not a big chore, if you stack them in the sink and never do them then sooner than later you’ll end up with a mountain of dishes and bugs. Dishes= Homework/Life/Chores/Other things you can ignore)I could blame my stress on how busy I am or I could own up to the fact that i’ve been horribly unorganized despite the fact that i’ve vowed to get back on track each week and then only do for about two days.

Anyway enough about how unorganized I am, instead here is attempt #359 to get back on track and here’s what i’ve been doing. 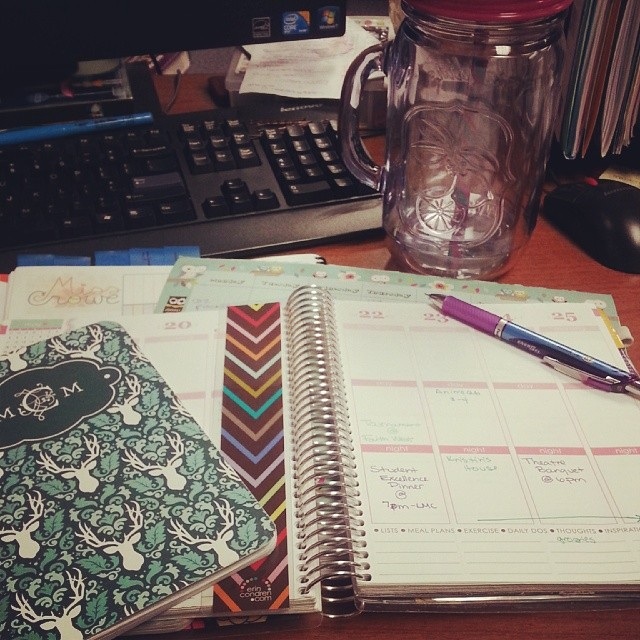 Listening: Everything Sam Smith! I’ve been hearing his voice on the radio for a while and after shazamming to see who was singing for the millionth time I finally decided to start listening to him in my free time. That was last week and I don’t think i’ve stopped listening to him yet. His voice is just too good. Check out ‘Money on My Mind’ and the acoustic version of ‘Latch’. Those are my favorites. Reading: I’m currently catching up on a week of blogs and trying to compile my summer reading list. I’m ALSO grading all the essays in the world right now. Thankfully some of my kids turned theirs in early so i’m able to space out the grading. This is the last essay they have to write for me and for some of these kids i’m so proud of the progress they’ve made this year, they’ve seriously come a loooonnnggg way.

Watching:
-The Voice! I caught the end last night when I got home from the orchestra concert. It’s over and Jake is not the winner and i’m actually sad about it. Not only did I love his voice but I loved him! He is probably the nicest person in the world and he was just so grateful all season long. I’m happy for Josh and his family but man, poor Jake! I am glad it wasn’t Christina though. Unpopular opinion but I do not like her voice.
-Also Game of Thrones. I can’t believe the season is coming to an end already, it’s going to be another long wait between seasons, and still a long wait until GRRM pumps out the next book. We were driving home from Laredo on Sunday night so I missed the original airing and had to wait until Monday night after practice. The internet was a scary place for those 24 hours. Even though i’ve read the books and I know what happens I still don’t like to have the events of the show spoiled for me. I made it up until 2 hours before I saw it and I stumble across a gif of the last scene. Thanks a lot buzzfeed!
-Now that The Voice is over I need more TV. Rage Against the Mini Van was talking about the Bachelor and now i’m considering watching it even though i’ve literally never cared about it. But I ran out of free episodes of My Big Fat American Gypsy Wedding on Netflix so I need *something*.

Doing: EVERYTHING. We went to Laredo for the weekend for Mara’s baby shower (!!!!!!) and it was such a nice, relaxing, comforting weekend. So at least I had before this crazy week started. The end of the year is always seriously busy but having 2 ComedySportz events this week has made it even crazier. I’m going to audition for the pro league tonight and i’m nervous but not nervous at the same time. I just hope it works out.

Wanting:  Too many things and not enough spending money to go around. Saving for a house really tightens up my budget :/
-I’ve been wanting to learn to knit for a while now and Knitting by Design looks like such a good beginner book.
-I’ve been looking for a black and white striped maxi for a while now and Target has one, but it’s not sold in stores and I really hate not being able to try things on first.
–These nautical slippers from TopShop. Too bad we don’t have any here or i’d swoop in and snatch them up. I hate buying shoes online for the same reason I hate buying clothes online.

That’s all for now!