Hello there to all of you living in Marty McFly’s 2015. I hope you are all enjoying your hover skateboards and fun outfits. I know I am!

So let’s see here. Let me start off by saying one of my intentions for this year is to blog at least once a week so i’m going to try and make sure I don’t neglect this. Side note: I can’t do resolutions because i’m too much of a contrarian. When I feel obligated to do something I want to not do it out of spite. So intentions it is!

My game plan this year is two-fold 1) Stop making excuses and actually focus on myself. Not just all the things that go with me. (more on what that means in a minute). And 2) You fail to plan, you plan to fail.

Those are the two main tl;dr points of this post at least so lets hop into those.

1) Treat yo’self (nicely and with love)

I have a bad habit of making lists that are filled with small things like shower and get dressed. I do it out of self preservation because I have anxiety and lists help me unless those lists are filled with things I didn’t ever get around to doing. So if I add small things I feel accomplished. Now my life and my accomplishments are like that but the opposite. On paper I appear to be a small details person, in actuality I am anything but because I am the biggest of big picture people. Which is why I consistently let myself be the thing that slides.

Because even though I don’t ever get enough sleep I bought a house. And even though I drink way too much soda, at least i’m half way done paying off my car! And even though I don’t ever excercise and I stopped doing meal prep that was good for us at least I pay all the bills and we have glowing finances! AND I graded all my student’s essays early and I got all my grades in super early. Who cares about me on the small personal level when the job is getting done and it’s getting done well; right? This is my problem. I let myself go in favor of getting the big things done. Even though those two things are never in opposition to each other. Why shouldn’t I be able to take care of business and take care of myself?

Buying a house didn’t mean I had to drink soda or eat Whataburger all the time. I just chose to prioritize the one thing and pretend it ate up all of my time. I forgot to plan for myself in the middle of all of my planning. Rather I didn’t forget, I chose not to. Because I didn’t have to take care of myself in those ways if I was taking care of my big picture needs like a house and my work and the finances. As long as those were being taken care of then I was doing okay. I didn’t have to feel like a failure despite the fact that I didn’t drink any water that day or none of my meals contained fresh produce.

So here I am now and i’m cutting out those excuses. I own a home and a car and the bills are just a part of my life. I don’t get a cookie for doing normal shit like that. I don’t get to use it as my excuse to not take care of me the human being with a mind and body that is not all these other things.

This leads me to #2 which is Fail to plan, plan to fail. It’s trite and cliche and a well worn phrase but it’s true. Y’all know by now that I love my planners and organization but at some point I just started writing things down and letting that make me fly by the seat of my pants. I knew where I had to be and when and what I had to do so I would do all of those things but they would just come at me like a ton of bricks. I wasn’t managing all that space in between, I wasn’t preparing. During the move I totally gave up on the whole apartment and all of my personal responsibilities and I felt constantly exhausted. So in order to fulfill #1 I have get back on my planning game. I have to really make sure i’m taking care of myself and preparing to do so. 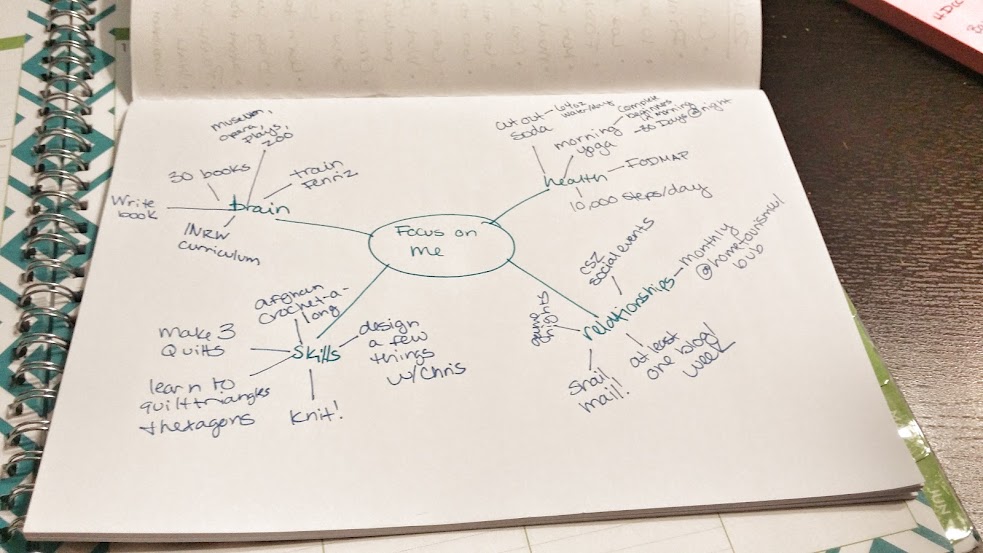 So of course I made a bubble chart to organize those ideas because #teacherlife. I broke it down into 4 main sections and what i’m going to do to fulfill those areas that need work.

The section that took the biggest priority was health. I’m getting bigger and weaker and i’m eating and drinking crappy things. My arthritis is killing me, i’m always tired, and it makes me moodier so something needs to change and by something I really do mean most things. I need to get up and do something because i’m finally tired enough of it to make some changes. Now my goal here is not weight loss and I will stress that. My goal is to stop feeling like crap all the time.

I don’t expect to be 100% perfect on these things but as of right now i’ve been soda free for 14 1/2 hours, did 30 minutes of yoga, and have had almost a half gallon of water. So far so good. Baby steps.

I’m trying to hold myself accountable for myself and for my fulfillment. I’m making moves and I hope they’ll stick, I mostly hope i’ll remember in a few days of weeks or whenever I get lazy about this about just how fed up I am with myself right now. I want to remember that I am finally at that point where enough is enough.

Some smaller plans and successes:

-I set my good reads challenge at 30 books again this year. Last year I got 18/30 and it would have been 19 if i’d finished Cinder on time (oh well!) I figure I can do the same thing and read 18 books again this year and then also read all 12 Noveltea book club books on top of that this time. I was a bad book club member last year y’all. I started but didn’t finish any of them and that is my bad book club confession. I’ve already got a sizable to-read list going on and not to mention a lot of sequels i’m looking forward to come out this year (notably the Seraphina sequel and 4th Throne of Glass novel) so i’m not worried about running out of things to read and getting stuck at least.

-There are some really great apps out there that i’ve found to help me with my goals. I got a JawboneUP24 for xmas so that is helpful. The HabitBull app is already proving useful as an accountability tool. And finally the Water Your Body app is great at reminding you that you should probably have a glass of water right now and allowing you to track your water intake.

-Mando and I are going to start a 28 FODMAP diet plan to see which foods are the culprits in making us feel like crap. It’s a pretty intense and restrictive elimination diet but if it will help us then i’m all for it. Plus I found and ordered this book that is a 28 Day FODMAP diet plan which is lessening my anxiety about the whole ordeal.

-I’m committed this time and that makes everything seem more possible. I’ve always known that these things are the right thing to do but i’ve never felt the compulsion to do them because I was getting stuff done. It’s time to stop hiding behind that.

Well that is my long winded post about all the things i’m intending to do this year. Hopefully I can look back on this post with pride at the end of 2015 and not wistful “Oh man I wish I had done that” nostalgia.

Here’s to a great year ahead!

P.S Most of the picture links on my blog are now broken because I was using their FB URL and then FB decided to change the format and location of their URLs or something. So i’ll be going through and trying to fix those. Bear with me during the construction. Thanks!